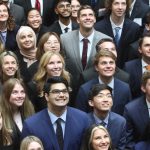 Ann Arbor, Mich., June 28, 2022 – The School of Dentistry’s new first-year class of DDS students arrived in Ann Arbor last week from points all around Michigan and the country.

• 58 Michigan residents and 51 students whose homes are out of state.

• 62 women and 47 men, which continues a trend in the last several years of more women than men in DDS classes that were historically male-dominated for more than a century.

• A collective gradepoint average of 3.80, high scores on the Dental Admissions Test and impressive lists of academic involvement, leadership and community service in their undergraduate years.

• 102 students hold bachelor’s degrees, five have master’s degrees, one has a PhD and one was admitted with three-plus years of undergraduate study.

Interim Dean Jan Hu and Associate Dean of Students Renée Duff led the welcome at the start of Orientation. Hu provided a historical overview of the university and dental school, along with a review of the departments and leadership. She noted that this class will be the first to spend all four years in the newly renovated facilities that have been upgraded and expanded over the last four years. The Blue Renew project is in its final couple of months before the school celebrates its completion at an event on Sept. 16. Hu and Duff encouraged the new class to supplement their hard work in academics and clinics by taking advantage of the many concerts, symposia and sporting events on campus during the year.

“You are now a member of the family of the University of Michigan,” Hu said. “It is a great institution with a tremendous legacy. Our school of dentistry enjoys an excellent reputation nationally and internationally. It takes the whole community to preserve and sustain that legacy as well as our continued excellence. We are here with you throughout the entire time. We want to contribute to your success. Work hard, take care, stay well and make us proud. Welcome to our family.”

Two fourth-year students, Jaerae Dell and Katelyn Johnson, shared wisdom gleaned from their three-plus years at the dental school. Among their tips for the new students were finding methods to stay well-organized and plan ahead for projects and tests so they can keep up with the rigorous academic routine. At the same time, Dell and Johnson said, students need to make sure that they take time away from their studies for stress relief and to ensure good mental health.

Johnson said some of the best advice she received was from a friend and dental school classmate who told her “You need to take time for yourself or you will not be doing as well as you could be.” Added Johnson: “That’s so true. If you don’t take the time to take breaks or you are getting less sleep than you should be getting, your performance will show it. Have fun. Laugh at your mistakes and learn from them.  Don’t dwell on them, it is not worth it. What can you learn from it and how can you make yourself a better person and a better provider? And remember – my favorite quote of all time – it all gets done somehow.”

Following are short biographies of several students in the new class that illustrate the wide-ranging journeys of students who enroll at the U-M School of Dentistry.

• Ainslie Woodward Jr., from Detroit, Michigan: Ainslie arrives as a first-year dental student after being a member of the first cohort of students to receive the dental school’s new Master of Science in Oral Health Sciences degree. Ainslie used his master’s degree year to focus on research and to boost his dental school application. He previously earned his bachelor’s degree from U-M in Biopsychology, Cognition and Neuroscience. For his master’s degree, he worked with faculty members Drs. Elisabeta Karl, Andrea Pobocik and  Clarissa Fontoura on a project related to dental anxiety and ways to control it in dental practices to increase general and oral health of vulnerable  populations. “It’s been phenomenal and I hope to stay on the research in this upcoming year at dental school for my Pathways project. Hopefully, when we start seeing patients, we can use accu-pressure to help modulate dental anxiety.” His first-day reaction to dental school: “Happy to be here. Everything is familiar so that is nice.”

• Silvana Uribe Luzardo, from Midland, Michigan: Silvana’s family moved from Bogota, Columbia, to Midland, Michigan, when she was 1 year old. She is following in the career of her father, Carlos Uribe, who owns Uribe Cosmetic and Family Dentistry in Midland. He, too, attended the University of Michigan School of Dentistry, earning his master’s degree in Restorative Dentistry. Silvana said she and her younger brother spent a lot of time at their father’s practice when they were growing up and both decided to follow his path; her brother is a student at the Detroit Mercy School of Dentistry. Silvana attended Michigan State University for her undergraduate degree and was a member of the MSU figure-skating team. She started figure skating when she was 9 and believes that experience translates well to dentistry and dental school. “I think it gave me so many skills that I can use in dentistry,” she said. “You need hard work, the passion, being able to continue and keep going and not giving up no matter how many times you fall or fail.”

• Leyao Shen, from Hangzhou, China: Leyao is the only student in the DDS Class of 2026 who already has a PhD. He came to the U.S. in 2012 to attend Vassar College in New York for his undergraduate degree in biology. He followed that with a PhD in cell biology from Duke University in North Carolina, working in the Developmental and Stem Cell biology program. His next stop was as a post-doctoral researcher at the University of Texas Southwestern Medical Center in Dallas. His research interests have focused on bone biology, more specifically how amino acids affect the maturation and activity of osteoblasts, the primary bone-forming cells. A particularly interesting craniofacial phenotype piqued his interest in dentistry, and he also learned that many bone researchers have dentistry degrees. He began to consider the benefits of adding clinical dentistry to his background in the basic sciences, so he shadowed some dentists and found the field interesting and challenging. “Because I only had a basic science background, I always wanted to see how realistic my research can be when applied to a clinical setting,” he said. Noting that scientific discoveries often take 10 or 20 years to translate into medical products and procedures to help patients, Leyao thinks his research background matched with a DDS degree could help inform and advance that process. “I want to see if I can become the bridge between both the clinical and the basic sciences,” he said.

• Brhan Eskinder, a California native most recently living in Oakland:  Brhan (pronounced Burr-han) thought she would be a school teacher. She earned an undergraduate degree in environmental studies at Spellman College in Atlanta, Georgia, then added a master’s degree in education in New York. She taught fifth grade math for two years in the Bedford-Stuyvesant section of Brooklyn in New York City, then returned to her native California to teach the same subject and grade level in Oakland for three years. But along the way, her family experienced a loss that prompted Brhan to re-think her career path. Her family’s longtime orthodontist in Los Angeles died suddenly and it became a “lightbulb moment” when she witnessed how emotional his death was for everyone, particularly her father. She was surprised to realize that the loss of a trusted healthcare provider “could ripple so far.” That experience provided the backdrop later when she noticed social media posts from friends at Spellman and Morehouse College about the Profile for Success summer program at the U-M School of Dentistry. The program aims to increase the number of historically underrepresented minorities in the profession of dentistry, by attracting undergraduates and others from educationally and financially disadvantaged backgrounds for tutoring and mentoring before they apply to dental schools. Friends encouraged Brhan to apply and she completed the program in 2021, scored well on the Dental Admission Test and was accepted to the U-M dental school. Is she planning to follow the family’s beloved orthodontist into that specialty? “It’s a little too soon to call it,” she said. “I’m just so happy to be here. I’m open to anything. I am feeling, more than anything, so grateful – and definitely nervous. I’ve been on the other side of the classroom for so long, so I’m hoping that something I picked up along the way as a teacher will help me now be a student again.”

• Brennan Metzler, from Cincinnati, Ohio. As a high school student, Brennan targeted U-M for his undergraduate education because he was interested in a career in healthcare and he knew Michigan had excellent programs in both medicine and dentistry. By the time he enrolled as a freshman, he had settled on dentistry after shadowing an oral surgeon and other dentists in Cincinnati. He majored in biomolecular science and immediately began making connections at the dental school. First, he joined the research lab of faculty members Dr. Carlos González-Cabezas and Dr. Margherita Fontana, which focuses on understanding dental caries and improving its clinical management. He worked in the lab for more than three years. He was also in the U-M Pre-Dental Club, holding a couple of offices, including president during his senior year. The club brought in dentists to help the prospective dentists understand the ins and outs of the profession, the requirements of the various dental specialties and common challenges of dental school. As one of the beginning dental students who decided on this path several years ago, last week’s orientation brought it all into reality. “It’s been a long time coming, definitely the last five years since I started at Michigan, and even some decisions in high school were made to put myself in a good position for a healthcare field,” Brennan said. “And once I made the decision before my freshman year that dentistry was the direction I wanted to go, then those next years were targeted to make myself a competitive candidate for dental school. There’s definitely an intimidating factor because everyone is very smart at this great university and at dental school, so it’s obviously going to be very challenging. But it is definitely excitement to see all of my efforts come to fruition.”