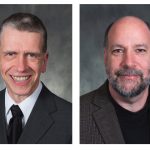 Roy Roberts, a 1932 graduate of the School of Dentistry, and his wife, Natalie, were loyal donors to the school over the course of their lifetimes. Together with their family foundation, the Roberts gifted more than $13 million to the school, including the funds that led to the two professorships.

During a virtual program Monday, Vesa Kaartinen was installed as the new Dr. Roy H. Roberts Professor of Dentistry, and David Kohn was installed as the first Natalie C. Roberts Professor of Dentistry. Dean Laurie McCauley announced the five-year, renewable appointments last year, with the support of the School of Dentistry Executive Committee and the approval of the University of Michigan Board of Regents.

The Roy Roberts endowed professorship was established in January 2002 to honor the distinguished alumnus and supporter who practiced in Ecorse, Mich., until his retirement in 1986. Several faculty members at the school previously held the professorship before it came open and Kaartinen was appointed. In April 2020, investment funds from the original professorship had grown enough to allow for the creation of the second professorship that was named for Natalie Roberts. Kohn is the first to hold the professorship.

Dean Laurie McCauley recounted some of the life history of the Robertses, as well as their loyalty and generosity to the university and dental school. Roy Roberts grew up in Maple Rapids, a small village northwest of Lansing, and attended Michigan State Normal College, now Eastern Michigan University, in Ypsilanti. He was encouraged to consider dentistry as a profession by a roommate who had already spent two years in dental school. Not convinced it was the profession for him, Dr. Roberts quit college to work as a traveling salesman, selling underwear and ties in dozens of Michigan towns. It was a tough way to make a living, but years later Roberts noted, “On the bright side, the experience made a degree in dentistry sound very appealing.” He went back to Ypsilanti, completed a two-year pre-dent program and was admitted to the U-M School of Dentistry. He practiced first in Detroit, where he met Natalie, a nurse, in their boarding house that catered to young professionals. She initially helped in the new practice Roberts opened in Ecorse a few years later. Roberts operated his dental practice for 50 years before the couple retired to Florida.

In addition to the two professorships, the couple and the Roberts Family Foundation they established in 1997 have provided major support for scholarships, created a faculty innovation fund and sponsored an annual Continuing Education course. The foundation’s $10 million gift to the school in 1997 was the largest gift ever to a dental school at that time. “In total, our school has received more than $13 million in support thanks to Roy and Natalie’s vision, commitment and extraordinary generosity,” McCauley said. “For that we say thank-you. A very big thank-you.”

The virtual installation was attended by the Roberts’ son John and his wife, Anne, and the Robertses’ granddaughter, Becky Roberts. John Roberts said his father’s experience living through the Great Depression influenced his hard work and long hours during his dentistry career, and it led him to invest in the stock market, where he had considerable success over many decades. “He was forever grateful to the University of Michigan for his education and training, which was the foundation for his success,” John Roberts said. “Part of his life plan was to give back, and that’s why we’re here today to witness that. It’s our hope that current students and alumni will take his example as an incentive to do likewise.”

Professors Kaartinen and Kohn thanked the Roberts family for establishing the professorships and gave presentations recounting their career and research histories.

Kaartinen joined the faculty in the Department of Biologic and Materials Sciences and Prosthodontics in 2008. He was appointed Associate Dean for Research in 2019 and has been Director of the Oral Health Sciences PhD graduate program since 2018. He earned his Master of Science in biochemistry in 1986, and his PhD in biochemistry and molecular biology in 1991, at the University of Kuopio in Finland. In 1996, he completed a post-doctoral fellowship in molecular biology and mouse genetics at the Keck School of Medicine at the University of Southern California. From 1997-2008 at USC, he held several appointments related to pathology and surgery. His research involves growth factor signaling in craniofacial and cardiac development that leads to common birth defects, including cleft lip and palate and cardiac septation and valve defects. Understanding the molecular basis of these conditions is important because it will ultimately allow for preventive and/or therapeutic approaches to treat midfacial fusion defects or congenital cardiac defects during the fetal period, as well as new therapeutic targets to treat heart disease.

Kohn, a professor in the Department of Biologic and Materials Sciences & Prosthodontics, joined the dental school in 1989. He is also a professor of biomedical engineering in the U-M College of Engineering. He received his Master of Science and PhD degrees in bioengineering from the University of Pennsylvania, where he was a research fellow from 1984-1989. His research develops biosynthetic organs and tissues for clinical applications. His interest in tissue engineering and regenerative medicine is the foundation for his work as co-director of the Michigan-Pittsburgh-Wyss Regenerative Medicine Resource Center, which has received the two largest grants in school history, from the National Institute of Dental and Craniofacial Research at the National Institutes of Health. He is also leading a U-M Biosciences Initiative Award for high-impact research to develop applications in organ and tissue replacement and regeneration. Kohn’s research has attracted federal funding for more than three decades.

A recording of the complete installation of the Roberts Professorships is available here.