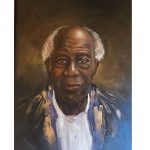 Dr. Lee Jones remembered as a dedicated leader who worked tirelessly to make diversity, equity and inclusion a fundamental value for the School of Dentistry9 min read

Dr. Lee Jones remembered as a dedicated leader who worked tirelessly to make diversity, equity and inclusion a fundamental value for the School of Dentistry9 min read

Ann Arbor, Mich., Sept. 30, 2022 – The late Dr. Lee W. Jones, a School of Dentistry alumnus and the first director of its diversity initiative that began in the 1970s, was remembered at a recent Celebration of Life service as a determined leader and mentor to hundreds of students during his years at the school.

About 250 people, most in-person at Kellogg Auditorium and some online, attended “A Celebration of the Life and Legacy of Dr. Lee W. Jones, Jr.” on Aug. 27.  Family members, school administrators, dentistry colleagues, alumni and current students gathered to share stories and praise of Jones’ dedication to dentistry, education and creating a more diverse student body and profession of dentistry.

Jones, who died on Sept. 6, 2021, at the age of 87, was the first African-American to have a dental practice in Ann Arbor after he graduated from the dental school in 1961. Even as he maintained the practice, he returned to the dental school after several years to become an instructor and, in 1973, was named director of what was then called the Office of Minority Affairs. Under his leadership over the next 20-plus years, the school developed programs that increased minority enrollment and established the school as a leader in increasing diversity in dentistry.

The many stories recounted during the celebration documented Jones’ tireless contributions to diversity, equity and inclusion over his long career. A video tribute with brief interviews of people who knew Jones included numerous Black dentists who are alumni of the school and said they would not have become dentists with long and successful careers if not for the support they received from Jones. Several said that during dental school they would often share their worries about the difficulties of dental school or their financial problems with Jones. His unwavering positive responses, whether as a sounding board or by going the extra mile to find solutions for the students, buoyed them and encouraged them to carry on with their studies.

Those students who became dentists are perhaps the most important part of Jones’ legacy, said  Dr. Todd Ester, the school’s current Assistant Dean for Diversity, Equity and Inclusion who carries on the work Jones started in 1973. Ester called Jones a giant in the lives of many people, including the more than 250 Black dentists who have graduated from U-M over the last three decades. Ester noted that Jones’ work is still on display today, when the school has about 50 Black students in the various DDS, dental hygiene and graduate programs. That compares to the time when Jones first started at the school and there may have been only one or two Black students in any given year.

“Today, we gather to honor one who was always up and doing, one who left footprints on the sands of time that have been the beacon of light to help many of us find our way,” Ester said in opening the celebration.

Dr. Ken May, an emeritus professor who still teaches at the school, considered Jones a mentor from his days as a student at the school. He recalled that once Jones connected with a potential student or student, he worked tirelessly with them and for them. “The thing I loved about Dr. Jones is that he was about business, about getting things done,” May said. “If you said you wanted to go to dental school, he was on it.”

Several years after Jones retired, May followed in his footsteps as director of what was known then as the Office of Multicultural Affairs and Recruitment Initiatives, from 2007-13. May recalled that admissions recruiters at other dental schools around the country breathed a sigh of relief when Jones retired because they said they couldn’t keep up with his successful recruiting, which one described as being like a tornado.

May said he adopted Jones’ view that even if a minority student chose a different dental school, it was a win for dentistry. Jones’ aggressive recruiting had forced other dental schools to also step up their efforts in recruiting minority students, which is yet another way Jones influenced dentistry, May said. He called it, “Getting people to do what they needed to do.”

Dr. Laurie McCauley, Provost of the University and former dean of the dental school, said the school today reflects the commitment Jones demonstrated decades ago. “Dr. Jones’ work and his engaging personality were key to making the dental school a place in which all students feel welcomed and included,” she said. “Today the foundation that Dr. Jones laid is a critical support for the School of Dentistry. In the past two years, our country has been reckoning with the role of racism in our society, but our university and our school have dedicated work to this area for many, many years. And thanks to Dr. Lee Jones, his contributions have made a critical difference. His efforts led to inclusion becoming a fundamental value of our school. It’s shaped our work in student and faculty recruitment and support in the care that we provide for our patients.”

Dr. Jan Hu, Interim Dean of the School of Dentistry, honored Jones for his lifetime achievement and long-lasting impact. “It is his support for the underrepresented students that brought diversity, equity and inclusion to dental education, which not only elevated our school of dentistry, but also the entire profession of dentistry.”

One of Jones’ daughters, Dr. Karen-Lee Jones Stewart, closed the celebration with several memories of her father’s approach to his work. A 1994 graduate of the dental school, Jones Stewart joined her father’s practice and still operates it today. As a dental student, she remembered her father telling her, “Dental school is hard. And it’s supposed to be hard. You’re learning the basics of skills to carry you through your entire career.” Jones Stewart noted that very few dental students come out of the experience without a few figurative scars, but her father was determined to improve the student experience when he returned to the school as its Director of Minority Admissions in 1973. “His maxim was to help as many people as you can, as much as you can, for as long as you can,” she said.

Jones Stewart recalled that after successfully leading the school’s minority admissions office for about 10 years he lamented that his job should have been a bit different, making the point that everyone in the community needs to help recruit the next generation of dentists, particularly among unrepresented minority students. “My graduates should be recruiting the next set of dental students,” he told his daughter. “The next set of dental students are in your (dental) practices, sitting in your chairs. They’re in your churches. They’re your children’s friends. They’re your nieces and nephews.”

In closing, Jones Stewart told the audience: “I encourage you all to please continue to do Dad’s recruitment work.”

A new conference room that is part of the recently completed Blue Renew major renovation at the dental school has been named for Dr. Jones. It was made possible by a financial gift from Dr. Marilyn Woolfolk, an alumna and Professor Emerita of Dentistry and Assistant Dean Emerita for Student Services, and Dr. Ron Stewart, an alumnus. A portrait or Dr. Jones painted by Dr. James Lee, a 1990 alumnus of the school, was unveiled during the celebration and will be displayed in the room. Dr. Ester said the portrait “perfectly captures and highlights his gentle enigmatic personality and strength.”

The school has previously honored Lee Jones’ leadership and service to the school, with the Lee Jones Dentistry Diversity Program and the Lee W. Jones Scholarship Fund, which provides need-based financial aid for students. In 2014, Dr. Jones received the dental school’s Distinguished Service Award, and in 2008, he received the Civil Rights Award from the National Dental Association.

Student Profile: Holly Rizzo sets aside performing – at least for now – to focus on her career as a dentist