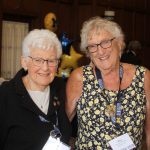 Ann Arbor, Mich., August 24, 2022 – A century of dental hygiene education at the University of Michigan School of Dentistry was celebrated last weekend as alumni, faculty and friends gathered from around the country to mark the milestone.

The Dental Hygiene Division was created in 1921, among the earliest in the country, after a national movement championed the need for educating and certifying hygienists to assist dentists. A century later, the school has graduated more than 3,500 dental hygienists with bachelor of science degrees or certificates (an option discontinued in 1985). In addition, graduate degrees have been offered since 1964, making U-M the oldest graduate dental hygiene program in the country.

At Saturday’s Centennial reception and program at the Michigan League, about 150 people gathered for a reunion-style event, with graduates from many years in attendance.

Two women from the Class of 1948 were honored as the oldest graduates in attendance. Myra (Townsend) Breakey, 94, of Clark Lake, Michigan, and Virginia (Brooks) McKown, 93, of Mt. Lebanon, Pennsylvania, earned their hygiene certificates 74 years ago.

Members of three classes – 1970, 1971 and 1972 – received special recognition for their 50-year, or emeritus, anniversaries in a special program before the main Centennial Celebration. The three classes celebrated together because the pandemic had disrupted the usual annual schedule recognizing emeritus classes. Interim Dean Jan Hu provided presented an update on the many aspects of the School of Dentistry, its various educational programs, the recently completed Blue Renew renovation and expansion project, and a review of the various departments. Each member of the classes received a medallion commemorating their emeritus status.

During the centennial luncheon, the school presented a new documentary-style video produced by its Marketing and Communication Office that recounts the highlights of a century of Dental Hygiene. It includes historical photos dating to the early years and interviews with faculty and program graduates detailing key points in the evolution of the program.

Keynote speaker Dr. Laurie McCauley, who was dean of the School of Dentistry for nine years before being named U-M Provost last May, cited the hygiene program’s longstanding tradition of innovation, with outstanding leadership from only four directors over the century. The comprehensive curriculum, grounded in the sciences, has evolved continually to include options such as degree completion and online courses. A key advantage of the hygiene program being at a School of Dentistry, McCauley noted, is that hygiene students are able to work closely with dental students during their clinical education, preparing the future dentists and hygienists for the collaborative care they will experience in their careers. To meet a current growing demand for hygienists, the school recently expanded the size of the entering classes and shortened the timeline of the bachelor’s program to a two-year, year-round schedule; previously students took summers off in a three-year timeline. McCauley said the strong foundation and the consistent innovation over the history of the program leave no doubt that it is the best Dental Hygiene program in the country.

Beyond preparing hygienists, McCauley said, the program prepares its students to go on to a variety of roles in healthcare. Previous graduates have gone on to dental school, public health, administrative and leadership positions in higher education, health insurance and other companies that support dentistry. “To all these fields, they contribute the perspective of patients, their knowledge of the challenges patients encounter in obtaining care or paying for it or both, and it contributes to better policies and practices for our world,” McCauley said.

Dr. Purnima Kumar, chair of the Department of Periodontics and Oral Medicine, in which the Dental Hygiene division resides, noted its far-reaching impact over its history. “In the 100 years that this program has been in existence, we have not only trained and educated the best dental hygienists in the land, but we’ve also been at the front of innovation, of research, of policy-making, and advocacy,” she said. “And many of you here in the room are testaments to the efforts of the great educators that we’ve had in this program. Today we are truly celebrating you and the success and the pride that you have brought to this program and all of us.”

Wendy Kerschbaum, who led the division as director from 1988-2012, recounted significant developments in the division’s history over the years, including the hiring of the first two directors of the program, Dorothy Hard from 1924-1968 and Pauline Steele, from 1968-88. Hard set a standard that would have been difficult to replicate for most successors, Kerschbaum said, but Steele was an accomplished hygiene educator in her own right who seamlessly led the school through its next era of excellence. Kerschbaum, who holds both a bachelor’s and master’s degree in DH from the program, plus a master’s in Public Health from U-M, was a first-year student the same year Steele took over as director. Their mentor-mentee relationship eventually led to Kerschbaum succeeding Steele. When Kerschbaum retired in 2012, the program was handed to its current director, Janet Kinney.

“Even though there has been lots of change in those 100 years, it amazes me at how much has remained constant,” Kerschbaum said. “The University of Michigan has always been regarded as a leader in education and having a vision for the future. It continues to this day. From the beginning of Dental Hygiene, in 1921, there has always been an emphasis on community and serving the community, serving people in terms of their oral health needs.”

To summarize the strength and significance of the program, Kerschbaum said it is simple: “My answer is the people. Our faculty, our staff, our students, our graduates, and the community that is formed from that.  In the past, the present and obviously going into the future.”

Two awards for Outstanding Dental Hygiene Alumni were presented during the program, one for each of the last two years after the pandemic delayed the presentations. Carol Spear, who received her master’s degree in Dental Hygiene from the school in 1972, received the 2021 award. Amy Coplen, BSDH 2002 and MSDH 2009, received the 2022 award.

Spear, a resident of Bruceton Mills, West Virginia, retired on July 1, 2011, as a professor at the Department of Dental Hygiene at the West Virginia University School of Dentistry. She was a faculty member there for 34 years, and taught previously in the Department of Dental Hygiene at Foothill Community College in Los Altos Hills, Calif., for seven years.

Spear has presented numerous lectures and continuing education courses on infection control and bloodborne pathogens during her tenure at WVU, and was Chair of the School of Dentistry Committee on Infection Control. Although retired from teaching, she continues her interest in dental infection control and is an active member of the Organization for Safety and Asepsis Procedures (OSAP).

Coplen is the Program Director of the School of Dental Hygiene Studies at Pacific University in Hillsboro, Oregon. She joined Pacific as a faculty member in 2009 and served as Associate Dean for Interprofessional Education before being named Program Director.

Coplen gained clinical experience with the Dental Faculty Associates at the U-M School of Dentistry before entering teaching. During her time as an educator, she has pursued opportunities in professional development and networking. Most of her leadership involvement has been with the American Dental Education Association (ADEA), beginning with the Council of Students, Residents, and Fellows (CoSRF) and the Council of Sections. In 2015, in partnership with students, she helped start the first allied student ADEA chapter not associated with a dental school. She served in officer roles in the ADEA Section on Dental Hygiene Education, and is currently the Board Director for the Council of Allied Dental Program Directors.

Her research has focused on expanded practice dental hygienists in Oregon, exploring opinions on the addition of a dental therapist into the workforce and interprofessional education.  As Program Director, she held an instrumental role in the approval for a Dental Therapy Pilot Project that began in 2020. Her advocacy has included providing testimony in several committee hearings that led to the permanent legislation for dental therapists in Oregon and elimination of the single encounter live board patient for licensure. She is passionate about educating the current generation of students, drawing applicants into the dental profession that reflect the diversity of the overall population, and mentoring future leaders in the profession.

Coplen received the prestigious ADEA Gies Award in 2018 and the Pacific University Faculty Achievement Award in 2017.

Looking to the future

Janet Kinney, director of the Dental Hygiene Division, closed the Centennial program with a look toward the future. Kinney, who has both a bachelor’s degree and master’s degree from the program, was last year named the Dr. Dorothy G. Hard Legacy Professor, a new professorship honoring the foundational director of the program. Hard was known for her high standards, which is a commitment to excellence that has been carried on by all directors since, Kinney said.

“It’s important not to forget those core values and principles which were at the heart of our foundation over 100 years ago,” Kinney said. “Dr. Hard is known for setting lofty standards for her students in the areas of academics and professional behavior. In my mind, those standards are still applicable today. Times have changed a lot from the 1920’s when Dr. Hard expected the entering class to be composed of all single young women, to stand up when she entered the classroom, and certainly not to look at (the men who were) dental students. Today we are proud of the diversity of our cohorts as we know the value each student brings to the program.”

Her goals moving forward include refocusing on intraprofessional education, specifically dental students and dental hygiene students learning and caring for patients together, much as they will work with patients once they are practicing in careers after graduation. Where dental hygiene students once were separated from dental students, today the model is for shared time together in clinics where the students can learn from each other as they prepare and carry out treatment plans for patients.

A second goal, she said, is to enhance interprofessional education among the various health science fields at the university. Dental hygiene students have a significant role to play on a patient’s healthcare team, with particular expertise in preventative oral healthcare.

Kinney told the alumni and friends of the program who attended the celebration that she wants Dental Hygiene program graduates to retain the same loyalty to the school as past graduates have. “You are exemplary role models,” she told the audience members. “You have stayed true to your ‘blue’ connections, you have valued the education you received at Michigan, and you have graciously supported the program over the years. I am truly touched by your continued allegiance. In the words of our former dean, Laurie McCauley, you have ‘stayed blue’ and that is what I wish for our students of today and for the next 100 years.”

Alumni Profile: Dee Kelly (BSDH 1951) has contributed in many ways to dental hygiene and dentistry