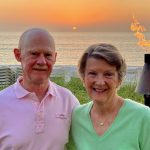 When James “Jay” Roahen was growing up in Wisconsin in the 1950s, a dentist was about the last thing he wanted to be.

His childhood dentist, who Roahen said was likely trained in the 1920s and never modernized his practice, drilled on Roahen’s teeth without anesthetic. “We didn’t have fluoride or anything like that, and I had a lot of cavities,” Roahen said. “I remember at one point I actually passed out in the dental chair, the pain was so bad.”

One day, the dentist suggested to Roahen that he should think about dentistry as a career. “And I said, ‘There is no way I’ll ever do this.’”

But his opinion of the profession changed when he entered the Navy after college and went to a Navy dentist. That was the first time he had anesthetic during a dental procedure. “And I thought, ‘Wow. This is unbelievable. I never felt a thing.’”

Later, he became friends with a couple of Navy dentists, and talking to them about their work, realized that dentistry would be a good career for him, particularly since he liked working with his hands. “It was perfect because when I was a little kid, I was doing stuff with my hands all the time. I was making models and I would collect insects and put them in cigar boxes with these delicate little pins.”

That realization led to a long and successful career as a general dentist and endodontist in the Navy and later in private practice. Now retired in Maryland, Roahen believes it’s his responsibility to give back to the institutions that helped him along his path. He and his wife, Kathleen, have made several substantial gifts to the University of Michigan School of Dentistry over the years, including a six-figure gift in 2008 to establish the Roahen Family Endowed Scholarship Fund, which provides scholarships to U-M dentistry students, giving preference to military veterans. More recently, Roahen has given two significant gifts to the dental school’s renovation campaign, $25,000 to name one of the dental clinic cubicles and $35,000 to name a conference room.

“I had a very successful career,” Roahen said, “and so I feel I need to give back both to support the school and also to make me feel satisfied that I’m not just taking but also giving.”

He’s particularly grateful to Michigan, because the way he sees it, he wasn’t the most promising dental school candidate back in 1972. He had an out-of-state undergraduate degree from Lawrence University in Appleton, Wisconsin, with what he called less-than-stellar grades. He had just finished his Navy service, which included a year in Vietnam, where he had been wounded. Dr. Donald Strachan, who was assistant dean of admissions at the time, decided to take a chance on him and some other Vietnam veterans, Roahen said.

“I know without him, I probably wouldn’t have gotten into Michigan because I knew what a great school it was, and I’m eternally grateful to him for that.”

Roahen is the first dentist in his family. He grew up Fort Atkinson, a small town not far from Madison. His mother was a homemaker, and his father was an engineer who designed dairy technology equipment. “It was a wonderful childhood,” he said. “I absolutely loved it. My mother would say on Saturday, ‘go out and play and don’t come back until dinner,’ and we would go all over town with our friends.”

In college, he took premed courses, thinking he might go into medicine. When he graduated in 1966, though, he didn’t feel ready to go into medical school, so he decided to enter the Navy’s officer candidate school in Newport, Rhode Island. After completing the training, he went to Hawaii, where he was a Surface Warfare Officer stationed on a destroyer based at Pearl Harbor. A couple of years later, he was sent to Vietnam, exactly one month after he and Kathleen got married.

In Vietnam, Roahen planned and commanded patrols of River Patrol Boats, or PBRs, in the Mekong Delta, where they frequently came under enemy fire. One day, a surprise enemy attack killed two men and wounded seven others, including Roahen. His shrapnel injuries were not serious, and he was able to call in air support to force the enemy to retreat and to evacuate the wounded.

The year in Vietnam was a tough one because of the combat and the difficult conditions, and because he was newly married and away from his wife. At the end of his time there, the Navy  stationed him in San Diego, where he taught at an anti-submarine warfare school. It was there that he met his dentist friends and decided to go to dental school.

He had some time between his Navy discharge and the start of school, so he and Kathleen spent six months traveling around Europe in a Volkswagen camper before they settled in Ann Arbor for dental school. But it wasn’t long before the Navy came calling again, offering him a scholarship that would pay for his education if he would agree to serve in the Navy as a dentist after graduation. He and Kathleen debated whether they wanted to commit to more time in the military, but ultimately decided to accept.

Roahen said it was apparent to him immediately that he was getting a great education at Michigan. The professors were dedicated, he said, and he particularly remembers one who sometimes stayed after class to impart his knowledge about running a business. This was valuable to the students, who knew that after graduation they would likely be joining or starting small businesses.

Among the most crucial lessons he learned, Roahen said, was the importance of attention to detail and to apply the best technical skills he could to every single patient. He also learned how to adapt to different kinds of personalities, a valuable skill for dentists, who are likely to encounter just about every personality type in the dental chair.

Roahen also made lifelong friends at Michigan. He and his wife connected with some other military veterans and other married couples. “We bonded together right away, and we’re still best friends,” Roahen said. “We actually have a group of eight couples that even today do things together a lot.” They’ve traveled together extensively and during the pandemic have taken to getting together over Zoom. “And we still laugh. We still have a great time together.”

After graduating from Michigan in 1976, Roahen served at Naval bases in San Francisco for three years and on an aircraft carrier for two years. He then accepted another Navy scholarship to get training in endodontics at the University of Oregon in Portland. While there, he also got a master’s degree in oral biology, graduating in 1983. “By the time that was over, I owed the Navy so many years that I figured why not stay in until retirement?” he said. As an endodontist in the Navy, he was stationed at Bremerton, Washington, and in Annapolis, Maryland, at the Naval Academy for three years. Finally, he was chairman of the Navy’s graduate program in endodontics at the Bethesda Naval Hospital in Maryland for four years.

He and his wife liked the Annapolis area so well that they decided to stay after Roahen retired from the Navy in 1993. He then went into private practice there with a partner, eventually retiring in 2012. Roahen’s son, David, plans to enter the same private practice in a year, after he finishes a graduate program in endodontics at the University of Maryland. Roahen’s daughter, Jenny Rizzo, is also not far away. She lives in Arlington, Va., where she is a grant writer for nonprofit organizations.

Since his retirement, Roahen and his wife have been avid travelers and are looking forward to the time when they can resume that hobby after the coronavirus pandemic subsides. They’ve been to all 50 states and about 70 countries. They particularly enjoy hiking in the Swiss Alps and traveling to many places with their group of friends from dental school. And they have a trip to Italy planned with their oldest granddaughter once it’s safe to travel again.

Roahen said dentistry was the perfect career for him, and patient satisfaction was one of the most rewarding parts. “Even as an endodontist, where I basically only do a few things, every patient really is a different challenge. It’s very, very satisfying to have a patient come in and be absolutely petrified and walk out smiling and saying, ‘I can’t believe I just had a root canal, and I never felt a thing.’ And that was my goal on every single patient.”

Now, with the gifts he and his wife are making to the University of Michigan School of Dentistry, they’re helping to ensure that a new generation of dentists will have access to the same excellent education that launched his career. The Roahen Family Endowed Scholarship Fund has thus far provided four-year scholarships to four DDS students since it reached distribution maturity in 2018.

“I have always appreciated the exceptional education I received at U-M, which gave me the foundation for an extremely satisfying and fulfilling career,” Roahen said. “My financial support to the school is a way for me to express that appreciation, as well as provide some financial assistance to students embarking on the same path.”

Dr. Robert W. Browne remembered for his generosity to dental school, many other causes