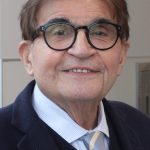 Ann Arbor, Mich., April 8, 2022 – Dr. George Goodis has seen a lot of changes in the field of dentistry during his more than 50-year career since graduating from the University of Michigan School of Dentistry in 1964. Most of them have been positive, like developments in technology and the overall improved oral health of the public.

But one change, an increasing pressure on dentists to do a high volume of work, worries him. And his concern about that has made him a passionate crusader for the highest level of ethics in dentistry.

Goodis, an endodontist in Grosse Pointe Woods, Michigan, is particularly concerned about the pressure on young dentists who may have shouldered a mountain of debt for their education and on those working in large group practices, where they may be encouraged to see a high volume of patients to increase profits.

Goodis stresses the importance of upholding ethics in the dental profession through his work with organizations such as the Michigan Dental Association and in his teaching at the University of Detroit Mercy, where he’s been an adjunct faculty member for more than 30 years. He believes advancements in the dental profession in recent years have made ethics even more important today than in previous decades. “Today’s times are good. We’re not our grandfathers’ patients and dentists,” he says. “We’re in the business of saving teeth, saving smiles and doing some incredible things, and ethics can be violated at that level.”

Together with his business partner, Gerald Halk, Goodis owns three endodontic offices – in Grosse Pointe Woods, Sterling Heights and New Baltimore. He sees patients four days a week in Grosse Pointe Woods and one day a week in Sterling Heights, while also fitting in a half day of teaching. Goodis, who’s been a practicing endodontist for more than 40 years, loves the discipline and ethical decision-making that comes with his profession as well as the improvement he’s able to bring to patients’ oral health. “In endodontics, you’ve got to manage discomfort and pain. I love getting patients out of pain. I love people looking good, feeling good and having good healthcare.”

Goodis has spent most of his career working not far from his boyhood home. The youngest of four brothers, Goodis grew up in Detroit, the child of immigrant parents from Greece. His father owned and operated a Greek restaurant in the historic Greektown area of Detroit. He credits his father with giving him the entrepreneurial spirit that made him enter a profession where he could own his own practice and be his own boss.

After graduating from Southeastern High School in Detroit in 1955, Goodis enrolled at U-M because of its excellent academic reputation. As a high-achieving student, he said he wanted to go to the best school that his parents could afford and that meant Michigan. He started out in the College of Engineering, planning to become an engineer like two of his three brothers.

Once he got there, though, he began to think that engineering might not be for him and decided to explore other options. He switched to the College of Literature, Science and the Arts and majored in biology. He was thinking about a career in medicine, but when he became a patient at the dental school, he was impressed with the work being done by dental students. The mechanical aspects and inventiveness of the profession intrigued him. “When you go from engineering to dentistry, it fits quite well because when you’re with a patient doing dentistry you’re really inventing,” Goodis says, noting that every patient’s tooth anatomy is different, and dentists must deal with those differences when devising and executing a treatment plan.

He finished his undergraduate degree in 1959 and applied to and was accepted by the School of Dentistry. He didn’t bother applying anywhere else. The dental school’s outstanding reputation as well as his love for Ann Arbor made Michigan his one and only choice. Goodis has fond memories of his time in dental school and credits the faculty for the outstanding education he received. In particular, he remembers and appreciates the critiques he got during clinical work from Dr. J. Russell Anderson, a professor of dentistry in the Department of Prosthodontics. “He was very strict, very disciplined.”

Goodis continues to enjoy the connections he made at Michigan and feels grateful to have received his education there. “There is something about the University of Michigan School of Dentistry. As you are becoming educated by those in front of you, you really begin to respect not only who they are and where they’ve come from, but you know you’ve made the right choice because the quality is so supreme. They’re a step above and beyond continually.”

During dental school Goodis was inspired by faculty member Dr. Ralph Sommer, a pioneer in the field of endodontics and root canals. Sommer, who taught at the dental school from 1924 to 1968 and led both the endodontics and radiology departments, was one of the founders of the American Association of Endodontists and was the organization’s second president. Goodis was drawn to the advancements in endodontics Michigan was making under Sommer’s leadership and decided to make the specialty his career.

All these years later, Goodis is helping keep his former professor’s legacy alive by chairing the Ralph F. Sommer Endodontic Symposium in June at the Edsel and Eleanor Ford House in Grosse Pointe Shores. The symposium is usually held every year, but this will be the first one since 2019 because of the Covid-19 pandemic. Goodis’ nephew, Charles Goodis, also a U-M School of Dentistry graduate, who invented several endodontic instruments and founded a company to manufacture them, will be among the speakers.

While George Goodis was studying at Michigan, the Vietnam War was raging. He had received a draft deferment so that he could complete his education, but once he graduated from dental school in 1964, he had to enter military service. He was accepted as a captain in the Army Dental Corps. He said someone asked him if he would like to go to the North Pole, and he immediately said yes. He actually went, not to the North Pole, but to a spot not far away, Thule Air Base in Greenland. Thule was home to the United States’ Ballistic Missile Early Warning System, designed to detect any launch of ballistic missiles from the Soviet Union. Goodis lived in the hospital with other medical personnel while he was stationed at the base for a year to provide dental care to Army and Air Force members serving there. It was fascinating to live and work amid the stark beauty of the icy environs with several months of round-the-clock darkness followed by 24 hours of daylight, he said.

After his time in the Arctic, the Army sent him to serve in the San Francisco area for a year. There he provided dental care to military personnel stationed in the area. He also had the high honor of three times serving as a military escort for fallen soldiers from the time they arrived at Travis Air Force Base in California until they reached their final resting place. The first soldier he accompanied was 19-year-old Denton Crocker from Saratoga Springs, N.Y., who was buried at Arlington National Cemetery. Crocker’s story was featured in acclaimed filmmaker Ken Burns’ 2017 documentary “The Vietnam War.” “I did not know him,” Goodis says of Crocker, “but I was there as an honor to his service, and I was proud to be the escort.”

Following his military service, Goodis practiced for a couple of years in California and completed a residency program in endodontics at the University of Southern California in 1979. He liked California, but dentists there were starting to form group practices, and he wasn’t ready for that. He also felt a bit out of place in California culture. “I’m too traditional for Hollywood and L.A. and all that. I like the Midwest a lot,” he says. So, he returned to Michigan and opened his own practice.

More than 40 years later, his business is a bustling group practice that sees thousands of patients a year in the three locations. As he built his practice, he also found time to give back to the profession, serving in leadership roles in several dental organizations, including the Michigan Dental Association, of which he was president from 2004-05. He’s currently the Michigan section chair of the American College of Dentists, which is focused on advancing excellence, ethics, professionalism and leadership in dentistry. And he’s been chairing the Ralph F. Sommer symposium since 2017.

His work has not gone unnoticed. In 2007, he received the American Association of Endodontists Spirit of Service Lifetime Dental Community Volunteer Award. He says it’s important to give his time to these kinds of organizations to foster leadership and social connections across the profession. “You can’t do anything without having supplemental social connections, and I think just being part of these organizations helps you to be a well-rounded person.”

Goodis has also found ways to give back to the community. In 2009, he spearheaded an event at the University of Detroit Mercy that provided free root canals and crowns for 50 people in the Detroit area who had little or no access to dental care. Save a Tooth Day brought together 26 volunteer endodontists from the Michigan Association of Endodontists and 35 general dentists who provided free crowns. Goodis organized the event to help address the need for dental care in Detroit, where patients have a high rate of tooth decay and many have no dental insurance.

He’s made it a priority to mentor others along the way, including his nephew. Charles Goodis was studying mechanical engineering at Michigan when Goodis told him, “Chuck, mechanical engineering is great, but after that you’ve got to go to dental school at the University of Michigan, and then you’ve got to become an endodontist and work for me.” Charles Goodis took most of his advice. “Well, he didn’t do that last part, work for me,” Goodis says. But he did go to dental school at Michigan and go on to be a successful endodontist and entrepreneur.

Goodis continues to enjoy his teaching and mentoring at UD Mercy. While teaching, he says, he’s learning from the endodontic residents. And he also likes helping them reach the level of skill and maturity they need to become practicing endodontists, including how to manage patients’ pain and deal with more complicated procedures, such as removing cysts that can form after infections in teeth. For his teaching efforts, he received the American Association of Endodontists Part-time Educator Award in 2016.

He even manages to sneak in a little teaching and mentoring while seeing patients. “When patients come to me, I don’t want to just talk about how much I do for them. I want to talk about the value of saving teeth, the value of oral healthcare and how that contributes to looking good when you’re older. Having oral healthcare at the highest level is a beautiful thing. And endodontics is a major part of that.”

School of Dentistry again ranked No. 1 in the U.S. in annual QS survey