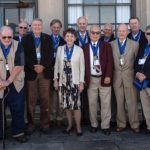 Ann Arbor, Mich., Sept. 30, 2019 – The School of Dentistry’s DDS and Dental Hygiene classes of 1969 were celebrated as they marked the 50th anniversary of their degrees during the school’s annual Reunion Weekend last Thursday through Saturday.

A program honoring the emeritus graduates drew 23 dentists, 15 hygienists and one alumnus who earned an MS degree in 1969. Each was presented with an emeritus medal and pin during a ceremony held at the Rackham Building on Thursday morning.

Dean Laurie McCauley gave the ’69 grads an update of the dental school’s current programs and achievements. She thanked the alumni for maintaining their connections with the school and for the financial support they contribute to ensure the school remains one of the best in the world.

“Our collective experiences make us strong, both as individuals and as a dental school,” McCauley said. “The high quality of our students and faculty throughout the history of the school is really remarkable. Every student and professor who came through this school helped build and maintain the culture of excellence that continues to this day.”

Also during the weekend, the school held its annual Hall of Honor induction and presented its Distinguished Service and Outstanding Dental Hygiene Alumni awards during a luncheon Thursday. Alumni attended a continuing education course on Friday and a reception was held Friday evening for School of Dentistry class years ending in 4 and 9. Dental school alumni also attended the U-M football game versus Rutgers on Saturday.

Elizabeth Pitts, chair of the School of Dentistry Board of Governors and a Dental Hygiene faculty member, introduced the awards and presenters.

The Hall of Honor award is presented posthumously by the School of Dentistry’s Alumni Society Board of Governors to recognize and honor individuals who have made outstanding contributions to the profession of dentistry. Nominees must be a graduate of the DDS, DH, MS or PhD programs, a faculty member or a research staff member. Since the Hall of Honor was created in 2003, 51 people have been honored.

This year’s honoree is Louis C. Schultz, who earned his DDS degree at U-M in 1926, a master’s degree at the school in 1942 and later became a well-respected educator and faculty member. After graduating with his DDS in 1926, he taught for a year, then over the next eight years worked in the Department of Dental Surgery at the Charles Jennings Hospital in Detroit and researched operative dentistry for the Bureau of Standards in Washington, D.C. He returned to the dental school in 1935, rising through the ranks to full professor by 1947, while maintaining a private practice in Ann Arbor. He was chairman of the Department of Operative Dentistry and served on the school’s executive committee for three years, from 1946-49. He retired in 1968 after 34 years on the faculty.

Faculty member Dr. Mark Fitzgerald, in presenting the award in honor of Schultz, noted the coincidence of this year’s emeritus DDS Class of 1969 dedicating its senior yearbook to Schultz 50 years ago. Schultz was a fellow of the American College of Dentists and chairman of the organization’s Michigan section. He was president of the American Academy of Restorative Dentistry from 1967-68, as well as chair of the organization’s program and clinics committees. He was a member of the Audit and Budget Committee of the American Academy of Dental Practice Administration. Schulz died in 1983.

Dr. Schultz’s retirement memoir approved by the U-M Board of Regents noted his standing with both colleagues and students: “The clinical instruction which Dr. Schultz offered to successive generations of students was central to their prospective practices and hence of prime importance to them. He earned their respect by his manifest authority, and their affection by his personal kindness. Both his students and his colleagues were aware that he was superbly skillful in his own practice.”

In his nearly half-century of service to the dental school, Dr. Emerson Robinson has demonstrated a remarkable dedication and devotion to the school as a clinician, educator and researcher. His legacy also includes pioneering work in the development of diversity, equity and inclusion programs for the dental school and university.

Dr. Robinson received his bachelor’s degree from Alabama State University in 1962, a DDS from Meharry Medical College in 1966, a Master’s of Public Health from U-M in 1970 and a certificate in Dental Public Health from U-M in 1971. He joined the School of Dentistry is 1971 as an assistant professor and moved through the ranks to full professor. His contributions to Community Dentistry and prosthodontics for DDS and graduate students have long been praised throughout the school. He helped research and advance denture materials and later branched into the dental and oral connection to sleep apnea, an example of how he pushed into new areas of dentistry that benefitted both patients and students.

In introducing Robinson at the award luncheon, Associate Professor Dr. Ken May praised Robinson for his distinction as the first African American faculty member at the school. May cited Robinson’s steadfast commitment to all students, but noted Robinson was an exemplary model for minority students who were considering the dentistry profession, those who entered the school and those who, after graduation, relied on Dr. Robinson’s life experiences for counsel and mentorship. May pointed out that Robinson has continued to be a remarkable resource for the school in the 16 years since he officially retired in 2003.

Robinson’s community service includes work with the Coalition of Churches, Headstart at the Ann Arbor Child Care and Development Center, and the Ann Arbor Community Dental Center. He has served on numerous dental school committees, including admissions, appointments, promotions, tenure, the Executive Committee, Multicultural Initiatives and other key faculty and administrative positions. He also served at the university level, as a member of the President’s Advisory Commission on Minority Affairs, Martin Luther King Symposium Committees and Student Achievement Awards. A recipient of the school’s Ida Gray Award in 2000, Dr. Robinson was recognized that same year with the university’s Harold R. Johnson Award that honors faculty whose service goes above and beyond their regular duties and contributes to the development of a culturally and ethnically diverse campus community.

Cathlyn A. Patterson earned her bachelor’s degree in dental hygiene from U-M in 1961. After earning a master’s degree in education, she was a faculty member at Lakeland Community College in Kirtland, Ohio, for 40 years and the Program Director of the hygiene program for the last 32 of those years. She was cited for dedicating her life to dental hygiene, the education of several generations of students and the advancement of the profession.

When she retired in 2013, she received an extensive outpouring of gratitude from former students, faculty colleagues, college administrators and the general public. They credited her for building and maintaining a dental hygiene program that is recognized throughout Ohio for its high quality and outstanding graduates. Her students shared that she had been a role model throughout their careers, often encouraging them to pursue graduate education or achieve beyond their original plans and comfort zones. Not only did she participate in community service herself, such as annual “Give Kids a Smile” clinics, she also encouraged students to share their skills with the broader community.

Award presenters Janet Kinney, director of the Dental Hygiene Program, and faculty member Darlene Jones described that Patterson was the consummate professional educator who had the remarkable ability to remember names and details of her students long after they graduated. Patterson joined nearly every local, state and national dental hygiene association and organization over the years, often serving in leadership roles. Her resume documents that continuing education is a passion; it lists dozens of dental hygiene CE courses, workshops, meetings and conferences where she was not only attending courses but often leading them. Colleagues and others who watched her lead the Lakeland program cited her commitment to keeping the curriculum on the cutting edge of the profession, which meant long hours, always looking ahead and being prepared to implement changes and improvements. Kinney noted that part of Patterson’s formula for staying current was keeping in touch with her alma mater at U-M to consult on issues and topics germane to her program at Lakeland.

Donor Profile: Dr. Ron Shoha (MS 1973) – An endodontist who believes in paying it forward through the School of Dentistry